For many years now I have been living in a connundrum (SP?).... Being half German and half Irish, I have world war three going on in my head. My Germanic self insists zat ve do everyzing vell and ve vill do it now.... Whereas, always a little bit later, of course, my true Irish soul speaks out, telling me to feck it, do it later.! The net result is that I have spent a lifetime with half cleaned cupboards and  feeling guilty because I always want to plump my cushions and hoover!
Imagine my delight. when in January this year, so only a few precious weeks ago, my lovely sister confided in me that she felt the same. Oh the joy! We now freely, happily swop symptoms. We no longer feel like odd balls - in fact we think we are quite cool...well,  maybe we wouldn't go that far, but it is very true that a problem shared is very much a problem halved.
Anyway, today my German self certainly woke up first. In fact, I was awoken very early, at 5.45am, to be precise. Knowing that there were no trains running from my local station, and keen  to be in London for my art therapy course, I had given myself enough time to shower and do my yoga, please....I had planned to drive for 40 minutes to try and catch a train on a completely different line, which I duly did only to be faced with cancellations and serious delays due to inclement weather. Well, for a start that made me laugh, we wouldn't have batted an eyelid at such a wimpish excuse to cancel a train in Germany! I stood on the freezing platform watching the expected arrival of my already late train being pushed back and back... and made my decision... I had no chance of getting to college on time and very probably no chance of getting home again, so I turned around, gave my parking ticket to a grateful stranger and headed off to Petworth Park for a frosty, bright walk, armed with gloves, furry  hat and a camera. Heaven.
I came home,  uploaded my photos, drank loads of lemon and ginger tea, listened to radio 4 all afternoon and worked on these  - I think my Irish half made the right decision, but that might just be blarney speaking! And my evening has just been cancelled - the wrong kind of snow now , hey ho - more art then, or find an untidy kitchen cupboard... is there really no cure? 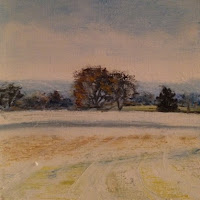 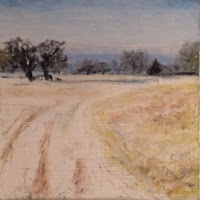 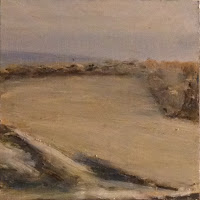 Posted by Karin Moorhouse at 11:58