http://www.youtube.com/watch?v=Hzgzim5m7oU
Posted by Karin Moorhouse at 02:21 No comments:

The ability to simplify means to eliminate the unnecessary so that the necessary may speak. Hans Hofman.
Again its all about everything, thinking, talking, relationships, seeing, drawing, planning, the list could go on  but it won't coz that would be going against what I've just said! Ha ha!
Posted by Karin Moorhouse at 01:24 No comments:

A lecturer when explaining stress management to an audience,
Raised a glass of water and asked,  "How heavy is this glass of water?"

He continued,
"And that's the way it is with stress management.
If we carry our burdens all the time, sooner or later,
As the burden becomes increasingly heavy,
We won't be able to carry on."

"As with the glass of water, you have to put it down for a while and rest before holding it again.  When we're refreshed, we can carry on with the burden."

"So, before you return home tonight, put the burden of work down. Don't carry it home You can pick it up tomorrow."

"Whatever burdens you're carrying now,  let them down for a moment if you can."
Posted by Karin Moorhouse at 14:43 1 comment:

Hello I'm back! I feel like I've been way for ages, but I was only  gone for a week... but it was such a great week.
I took myself off to Salisbury, to Sarem Studio, http://www.saremstudio.com to be exact, to spend my week on a portrait and life drawing course, run and taught by the tutor in charge of painting at The Carles H Cecil Studio http://charlescecilstudio.com in Florence. So, great crudentials and great learning. And that's what it's all about - the learning. I have been drawing for many years but there is always something else out there to learn.
This course was all about a method of portraiture referred to as "sight size". It's an expression I have heard bandied about for quite some time, it's been the fascination of many an art history book after all, but no-one has actually shown me HOW to do it! So it was with glee that I made my first sight-size portrait last week, and do you know what, it's so logical and uncomplicated.... why haven't we all been shown how to? 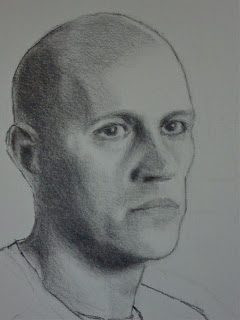 To get more info check out Nicholas Beer's book "Sight-Size Portraiture", not a racy title I agree, but a cracking book! And as for Salisbury, what a place, of course the sun helped, but such a bright, gentle, relaxing town. I can't wait till my next course in July....Thanks Nick, enjoy Florence till then 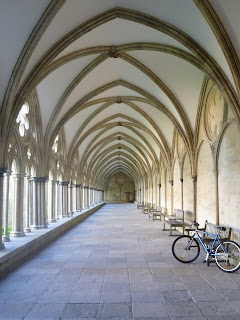 Posted by Karin Moorhouse at 14:41 No comments:

When talking about art as therapy, I think it’s  easier to talk about it in the abstract and the third person.... We do this for many reasons,  I guess, and often without even realising that we do, but today I have just come right up into sharp focus with the role art can play in helping  us feel and remember and heal.

A friend of mine  has begun a small series of models created from “stuff”, and she brought her latest one in today for me to look at. I thought it was amazing, look. 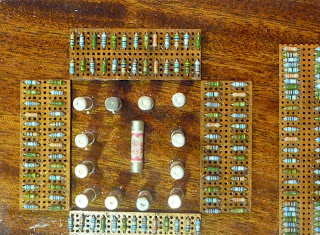 She has glued a  series of resistors and fuses  onto a highly glossed wooden base, all connected to a switch, which turns on a harsh buzzer .... I asked the obvious question, is there a story behind this? Oh yes, for a start it was called ‘Resistance is Futile’, which is a witty, clever title anyway, without any back story. Her first one was called  ‘Sectioned’, which was of a large board littered with keys. And so she began to tell me about her model...

When one is sectioned and drugs are about to be administered, an alarm is rung , all staff run to where the bell is ringing and gather round the patient. They then collectively grapple with him/her to get them  onto the floor and, when the patient is outnumbered and overwhelmed, he/she is injected with sedative drugs which can take days to wear off... The fuse lying down is my friend and the other fuses are the staff, circling her. Resistance is Futile. The resistors all around show just how tied up, and closed in my friend was. Her next piece is to be called ‘Bipolar’.

My friend talked about her sculpture and her illness openly and poignantly and honestly. I was so very moved to hear her talk and quite overwhelmed not only with her, but with her art. I am so privileged to count her among my friends and so very glad that we can make our art together, and so very glad we can talk together. It is all therapeutic to me.
Posted by Karin Moorhouse at 13:56 No comments:

Today,  I was supposed to be at, had booked some time ago,and thought I was looking forward to,  a conference on creativity in psycotherapy in London at the headquarters of BAAT, which is the British Association of Art Therapists, of which I am a member.

I use the past tense, because, yep, you’ve got there already, I didnt go!  Instead I woke up to pure sunshime, did my yoga for an hour, walked along the river, with a friend for an hour and a half and am now sitting here, just about to go into my studio to spend the afternoon painting. (New white reflections still life just starting!)

Not hugely remarkable to change one’s mind, I hear you say, not really special at all except that, for me, and since it was after all a lecture on therapy, I made the decision that going up to attend this day, was in fact stressing me out, not “nurturing’ me at all, so what was the point? I had found myself in an old familiar position, I had taken on too much. I was, and have been for some time, spreading myself too thinly, trying to do everything.

So, early yesterday evening,  I decided that I wouldn't attend, that instead I would go out and listen to my daughter sing along with her drumming and guitaring friends and relax. Now this may seem to have been a cop out, an  excuse to just do nothing,  but in reality, it was all about creativity being put into practice, not kept at the level of theory. I was watching these young, and older friends, literally, find their voices.

It is a gift, I believe, to be creative, and a further gift to have the bravery required to stand up and perform, but it is also a gift to the audience to see the strength found as “flow” happens during a performance. Finding voice and strength and release in creativity is as natural as breathing, but we sometimes forget to focus on this and get diverted into thinking we need to do everything else before we create and sing our own song. So I made my choice, and I kept my focus, and now I am going up the garden path to paint!
Posted by Karin Moorhouse at 06:26 No comments:

Just this weekend, I accomplished something I had gotten completely stressed about for no reason... Well, I say for no reason, but actually I had blown the reason out of proportion.

A while ago I was asked if I would like to take over a series of teaching portrait classes at Earnley Concourse, a residential centre, near Chichester, West Sussex, which runs courses in absolutely everything, it would seem! Now, teaching is something I do, have done, took a degree  to know I could, but haven’t done for a few years. And that was one of the rubs.

Another rub was fact that I had agreed to teach drawing animal portraits! I got completely worried that I wouldn't be able to deliver this and create  the right atmosphere for learning for my students. So in the weeks leading up to the course, I drew and drew and drew, and discovered that having felt just a teeny wee bit superior about drawing animals,  I actually quite liked capturing the characters of my feline house mates, and more than that, I enjoyed conveying this to the group over the course of the weekend.  I was, without doubt,  in the bosom of animal lovers but instead of feeling slightly silly, it all felt very relaxing and fun! 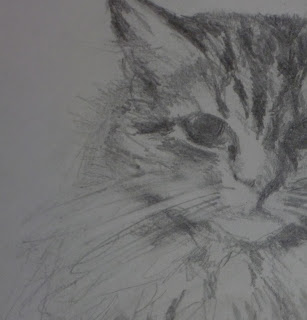 We chatted and joked and exchanged life stories amongst ourselves as we sat and drew. We shared glasses of wine and meals, and as we parted I know that each of us felt that we had  not only learned to draw better animal portraits, but also had been given  gifts - the gift of time for ourselves, the gift of sharing  something with others who are  from “our tribe”, if only for that brief time, and the gift of sweet memories.

I was given extra gifts too. Not only was I able to communicate  advice and direction, enthusiasm and enjoyment, but I was also  reminded that teaching is  a learning curve too.  I have always seen it as a circular movement, but I had temporarily forgotten  that, and now  I have remembered what I believe to be very important, that is,  we give as we teach and  we are given as we learn while we teach. A gift indeed.
Posted by Karin Moorhouse at 13:58 No comments: